Skip to content
Home > Congress > Massachusetts Is now a lawless Sanctuary State – Immigrants Don’t Have To Be Held For ICE: SJC – Hernandez: What happen to “We are A nation of Laws”

Carlos A. Hernandez: Massachusetts SJC has just put U.S. Citizen & legal Immigrants In harm way & once U.S. Citizen & legal Immigrants are harms by a illegal that was protected by these justice, They should be prosecuted & sued for by injured party & family for harboring and aiding illegal aliens, Title 1324 of the 8 U.S. code makes it a crime to transporting or smuggling aliens into the U.S. or harboring them there.

When did our nation lose its way, wake America our nation in grave danger of lawlessness, our security & safety may soon come to an  end.

Immigrants Don’t Have To Be Held For ICE: SJC 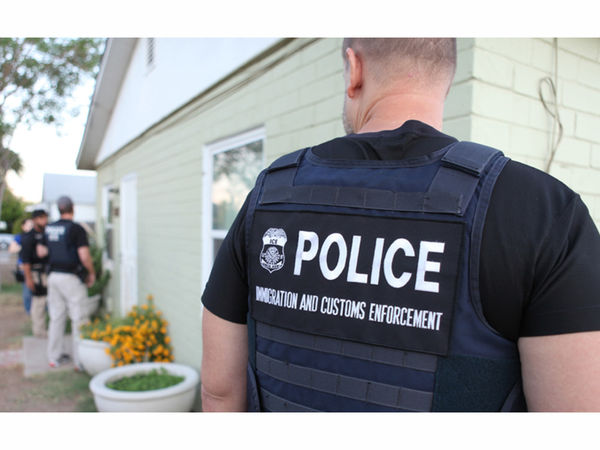 BOSTON, MA — State law does not permit officials to detain immigrants solely at the request of federal immigration officials, the Supreme Judicial Court ruled Monday, putting up a legal barrier to a long-running component of immigration enforcement.

In the case of Commonwealth v. Sreynuon Lunn, the court concluded that “nothing in the statutes or common law of Massachusetts authorizes court officers to make a civil arrest in these circumstances.”

No single justice was credited with authorship of the rulingthat declared, “Massachusetts law provides no authority for Massachusetts court officers to arrest and hold an individual solely on the basis of a Federal civil immigration detainer, beyond the time that the individual would otherwise be entitled to be released from State custody.”

The ruling could stir the immigration debate playing out in Congress and at federal courthouses, as President Donald Trump has sought stricter enforcement of border security and railed against jurisdictions seen as offering “sanctuary” to those in the country illegally.

According to the American Civil Liberties Union of Massachusetts, Lunn was born in a Thai refugee camp to Cambodian parents fleeing the Khmer Rouge and brought to the United States as a seven-month-old refugee in 1985. He now has two children who are U.S. citizens, according to the ACLU, which represented Lunn in the case.

Lunn racked up a criminal record in the early 2000s and was ordered deported to Cambodia, but the country would not accept him, according to the U.S. Department of Justice. Last year, Lunn was arrested on charges of an unarmed robbery that allegedly occurred in Boston. After the charges were dismissed in February, a Boston Municipal Court judge kept Lunn temporarily locked up at the request of Immigration and Customs Enforcement (ICE) on a civil detainer, or a request to hold a person otherwise entitled to be released to allow federal authorities time to arrive and take the person into custody for removal.

Monday’s ruling is moot for Lunn’s particular case, because ICE already had custody of him by the time it reached the high court, where four of the seven justices were appointed by Gov. Charlie Baker. Lunn was not deported and was subsequently released, according to the ACLU.

The U.S. Department of Justice contended that even without explicit law, Massachusetts officials have the “inherent authority” to detain people at the request of ICE.

The Supreme Judicial Court declined to take that view and further opined that “even if the Federal government wanted to make State compliance with immigration detainers mandatory, the Tenth Amendment likely would prevent it from doing so.”

The court also did not endorse the ACLU’s contention that the hypothetical creation of a state statute to facilitate compliance with ICE detainer requests would contain “constitutional violations” because of the lack of judicial oversight on the detainers.

“The prudent course is not for this court to create, and attempt to define, some new authority for court officers to arrest that heretofore has been unrecognized and undefined,” the court ruled. “The better course is for us to defer to the Legislature to establish and carefully define that authority if the Legislature wishes that to be the law of this Commonwealth.”

Senate President Stan Rosenberg told WHMP last week that lawmakers are awaiting the Lunn ruling before taking action on a bill (S 1305/H 3269) that would limit the state’s cooperation with the federal government on immigration enforcement.

“I don’t think anybody’s going to try to move on this issue until the Lunn case is resolved, because then we don’t know how much more has to be added to the law or how much is already actually addressed in the existing law,” Rosenberg said.